Abandoned: But oh, the history we discovered!

Several years ago we were driving some back roads from Raleigh to South Carolina. We were on the hunt for an abandoned school in South Carolina, you can read that post here. Somewhere outside of Fayetteville we saw this huge old abandoned house through the woods. 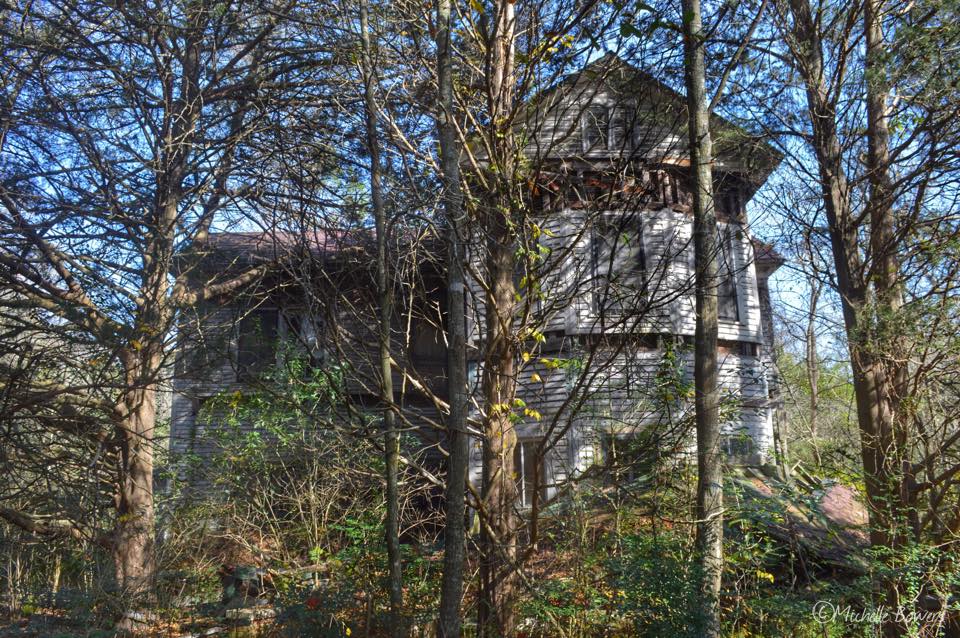 We stopped and I immediately started snapping pictures. First we noticed the plants! Whoever lived there was clearly an avid gardener. As we neared the house we started seeing mason jars of seeds. They were all labeled with numbers and letters. It definitely piqued our interest! This was the type of house where it appeared the occupants just up and left one day. Left all of their belongings and then people went in afterwards and ransacked it. Really quite sad the lack of respect and especially so when you find out who was living there! The upstairs of this house was falling down, even the downstairs was falling down so we didn’t attempt to go too far into the house. Inside we saw jars and more jars. Some were labeled like we saw outside. Most of the newspapers I saw were from the 1980’s. The structure itself wasn’t safe at all. I snapped a few more pictures and looked for clues that I could research later. I saw a few names. As we were driving off onto our next destination, I glanced off into the woods again and thought I saw a grave marker. Sure enough, a small family cemetery. We googled the names right there in the small cemetery and it all made sense!!! I found an article his daughter wrote about him and I am putting her words here with some of my pictures of his home and her pictures. You can find the full article here.

This house was the home of Lionel Dane Melvin, a very well known nurseryman who was one of the first to promote the use of native plants in home landscapes. He was a founding member of the North Carolina Wildflower Preservation Society. The University of North Carolina Herbarium has catalogued over 280 specimens collect by Lionel Melvin. Most of his specimens in the UNC Herbarium list “Pleasant Garden, NC,” the site of his home and nursery business, as the collecting locality. It was not unusual for him to spot a plant in the wild, then propagate it in Pleasant Garden, and make herbarium specimens from the cultivated plant. Think about all of the jars of seeds we saw there around the house. According to Lionel Melvin’s daughter, Sandra, “Dad’s education was to attend a one-room school house that his father built on his land. My grandfather’s sisters were the teachers. My family had a thing about educating the girls and not worrying too much about the boys. It continued into my father’s generation. All my grandfather’s sisters had college degrees, most in education and one in pharmacy. The pharmacist [aunt] had studied botany, and she influenced Dad as he grew up.” Melvin entered the University of North Carolina at Chapel Hill in 1932, but the financial stress of the Depression and a severe bout with Red Measles forced him to withdraw. Although Melvin did not complete an undergraduate degree, he did form a life-long friendship and scientific collaboration with Dr. Henry Roland Totten of the UNC-CH Botany Department. After withdrawing from UNC-Chapel Hill, Melvin found a job at Exotic Gardens in Miami, Florida. “Later when he met my mother, a teacher in Elizabethtown school,” says Sandra Melvin Gray, “he was working as a law enforcement officer. She transferred to Chincoteague Island and he followed her, [and worked] in the ship yards in Wilmington, Delaware.” In February, 1942 he married Lucy Bynum Lambeth (1907-1995), and they had two children, Sandra Lynn Melvin (b. 1943) and Lionel Dane Melvin, Jr. (b. 1946). He was drafted into the US Army in 1942, and was sent to study electronics and radar at the Massachusetts Institute of Technology. “After WWII he attended a short study course in Kentucky to learn to repair televisions, which were growing in popularity at the time. In Elizabethtown he had a record shop/appliance store in the late forties and fifites and that is where he collected our extensive collection of classical music on 78 RPM records. My mother graduated from Greensboro College in 1929 [with a] teacher’s certificate and a Bachelor of Music degree. She was a piano teacher and there was always music in our house. He was president of the Civitan club, [a leader in the] American Legion… and was a Justice of the Peace.” “He moved the business and family to Pleasant Garden [Guilford County], North Carolina in 1950. [In the mid-1950’s] he went to work for RCA’s down-range missile program…[and] we lived in cramped temporary quarters [in Cape Canaveral, Florida] a very short time. We all hated Florida. But while we were there we [went] on frequent field trips into the scrub to ‘botanize.’ We brought back [to Pleasant Garden, NC] a panel truck so full of plants that we barely had room for our clothes. After we returned, Dad changed occupations and went to work for Gilmore Plant & Bulb Company, and later, the Sears & Roebuck store as a landscaper. Afer a few years he started his own nursery… and a beautiful botanical garden on several acres. Dad was well-known among nursery people for his beautiful plantings of unusual plants. He had a grove of Yellow Wood [Cladrastis kentukea], Southern-plume [Elliottia racemosa], and expanse of Oconee Bells [Shortia galacifolia], and a lane of breathtaking Flame Azaleas [Rhododendron calendulaceum].” Lionel Melvin was a founding member of the North Carolina Wild Flower Preservation Society [NCWFPS]. “I think Dad was known for his efforts to save rare plants,” says Sandra Melvin Gray. “There was a rare Pixie Moss [Pyxidanthera] that, as president of the NCWFPS, he worked hard to save from loggers. One night, around midnight he heard on television that there was a forest fire burning in an area where that moss and another rare plant grew in South Carolina. He jumped into his ancient pickup truck and took off in the middle of the night on a five hour trip to find and possibly rescue those plants from the fire.” While the University of North Carolina Herbarium (NCU) was his primary repository, Melvin’s herbarium specimens can also be found in the Robert K. Godfrey Herbarium at Florida State University (FSU), Murray State University Herbarium (MUR), and the Steere Herbarium of the New York Botanical Garden (NY). “He had a cabinet full of [plant specimens] at his home. I remember him putting them between blotters and strapping them to press them. I remember visiting Chapel Hill as a child when Dad went down there. I played in the arboretum with my younger brother while Dad visited the Herbarium and Davie Hall. That would have been in the 1950’s.” “When he died, I and my brother, Lionel Dane Melvin Jr, donated all his rare and unusual specimens growing on his 14 acres in Pleasant Garden to the North Carolina Botanical Gardens.” Lionel Dane Melvin’s personal and professional papers are preserved in the Manuscripts Department, Southern Historical Collection of the Library of the University of North Carolina at Chapel Hill.

“Lionel Melvin may not have been an academic in the strict sense of the word, but he was a perpetual student all his life and eventually became an expert on plant identification. Plants were his life. He studied them every day he lived. He believed in preserving nature like it was a religion.”