Life of a Bachelor: The Austin Allen Story

Writing usually comes naturally to me, but I have been struggling with this one! The history we are finding out in this little alcove of Vance and Warren Counties could have been tucked away on genealogy boards forever. Some of the stories are so fascinating, especially this story about Austin Allen and Adline Allen.

Who was Austin Allen? From reading articles we have discovered, and even his very own obituary, Austin Allen was a lifelong bachelor. Apparently he loved to entertain guests at his home of “Oakdale”. We have been asking around to locals and trying to find out where “Oakdale” was located. I made several phone calls the other evening asking elderly locals that lived near Axtelle, and most for their entire lives. No one knows! One local never even heard of Austin Allen. There are some houses we know of that are no longer around, but they are accounted for. I spoke with one lady the other evening and she said, “My husband was always talking about Uncle Austin! He loved him so much! Austin was the uncle everyone loved! Probably since he didn’t have children of his own, he treated the nieces and nephews like his own.”

He did have children of his own, keep reading! I didn’t talk to her about the children he had, but I did ask to speak with her husband! Unfortunately, he is deceased. He was exactly who I needed to talk to! And she knew of no one else that could give me any answers. So we have decided to go with the house above being Oakdale. We are 75% sure. Even if we are incorrect, the story of Austin’s life and his relationship with Adline doesn’t change.

At the time of his death, Austin was the oldest living Civil War veteran in Warren County, North Carolina. He was born on November 11th, 1844 and he died on December 16th, 1931.

Austin is buried at the cemetery at the house above. Did he change the name from Oak Grove to Oak Dale? Here is where things get a bit foggy. This home was mostly known as Oak Grove or the Watson Place. This is the home that Bill Harris and I keep going back to and was the original home of William Watson Sr. At the age of 19, February 12, 1863, Austin Allen enlisted in the Confederate Army. He was a soldier, Company F, 12th Infantry, North Carolina. He actually fought with General Lee at ‘The Battle of Appomattox’. Austin was with General Robert E. Lee when he surrendered at Appomattox. It is said in genealogy records that Austin walked back to his parent’s plantation in Warren County, North Carolina.

This is where I started getting really attached to this other part of the Allen family. We started working on and restoring the Vincent Allen house. Our research has been leading us all around. Vincent Allen’s son was Edmund Allen. He married Sally Watson. Her father was William Watson, that’s the Watson Farm we keep going back to! Edmund and Sally’s plantation was nearby.  Their home was actually built by Jacob Holt and from what we know, no longer around. 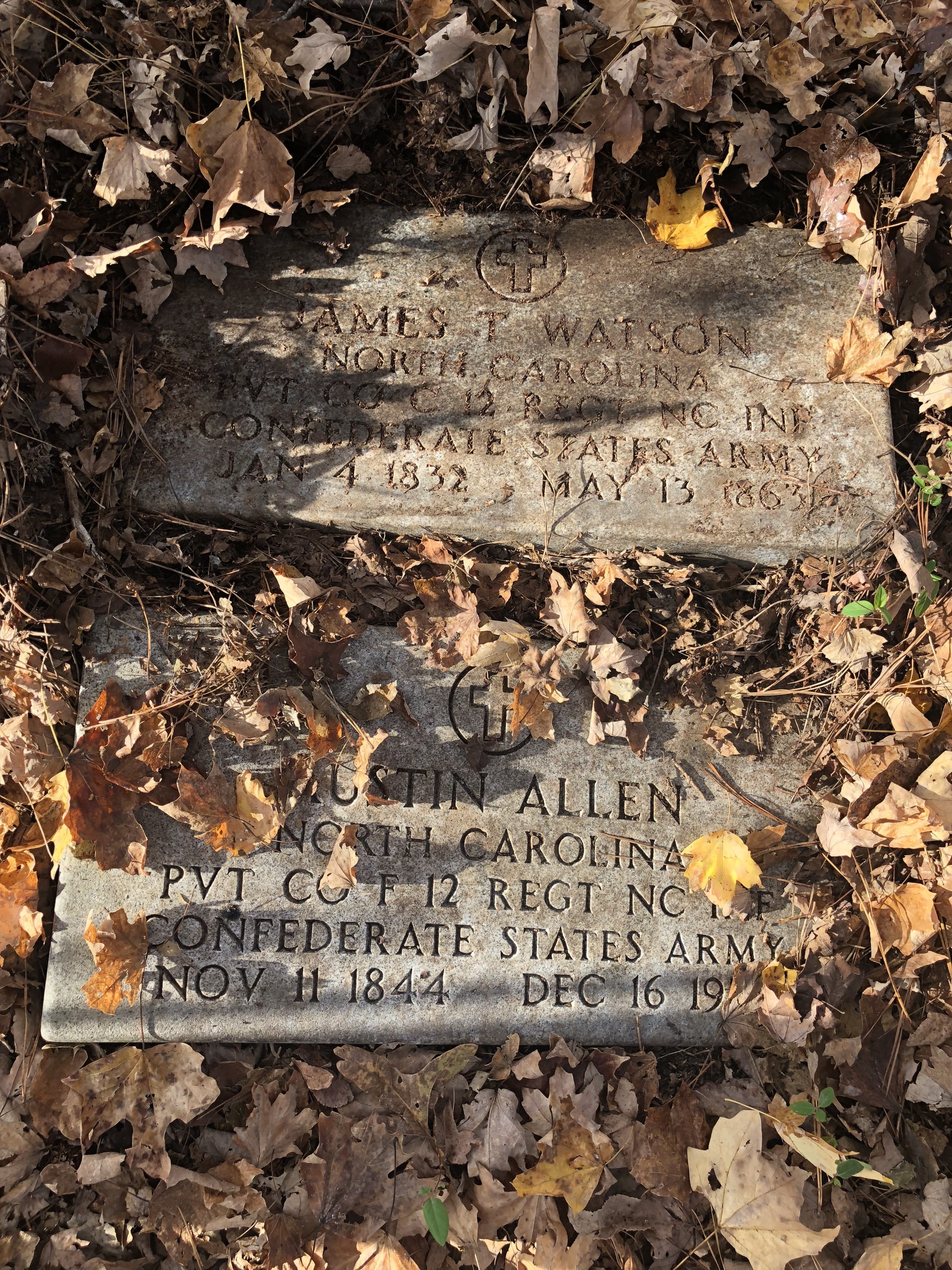 I keep imagining Edmund and his wife, Sally, wondering if their son was still alive? Were they out working their fields one day and saw him walking down the dirt road? Did she run to greet him? Did their slaves run in yelling that Austin was back? What happened on the plantation that day?

Once Austin returned to his parents plantation he moved somewhere into the town of Warrenton, NC. It was a house called Freeman. Shortly after that, he bought a plantation in Axtelle, in Warren County. It is there that he started a relationship with his own slave, Adline Allen. All signs point to a long term relationship. They had six children together. Some were listed as white, some as black, some as mulatto. Yet, Austin Allen was known as a lifelong bachelor until his death at the age of 93. Just imagine, he was a confederate soldier, fighting alongside General Lee and was with General Lee when he surrendered at Appomattox. He returned and had a very long relationship with his very own slave.

It is like something out of a Alex Haley mini-series! 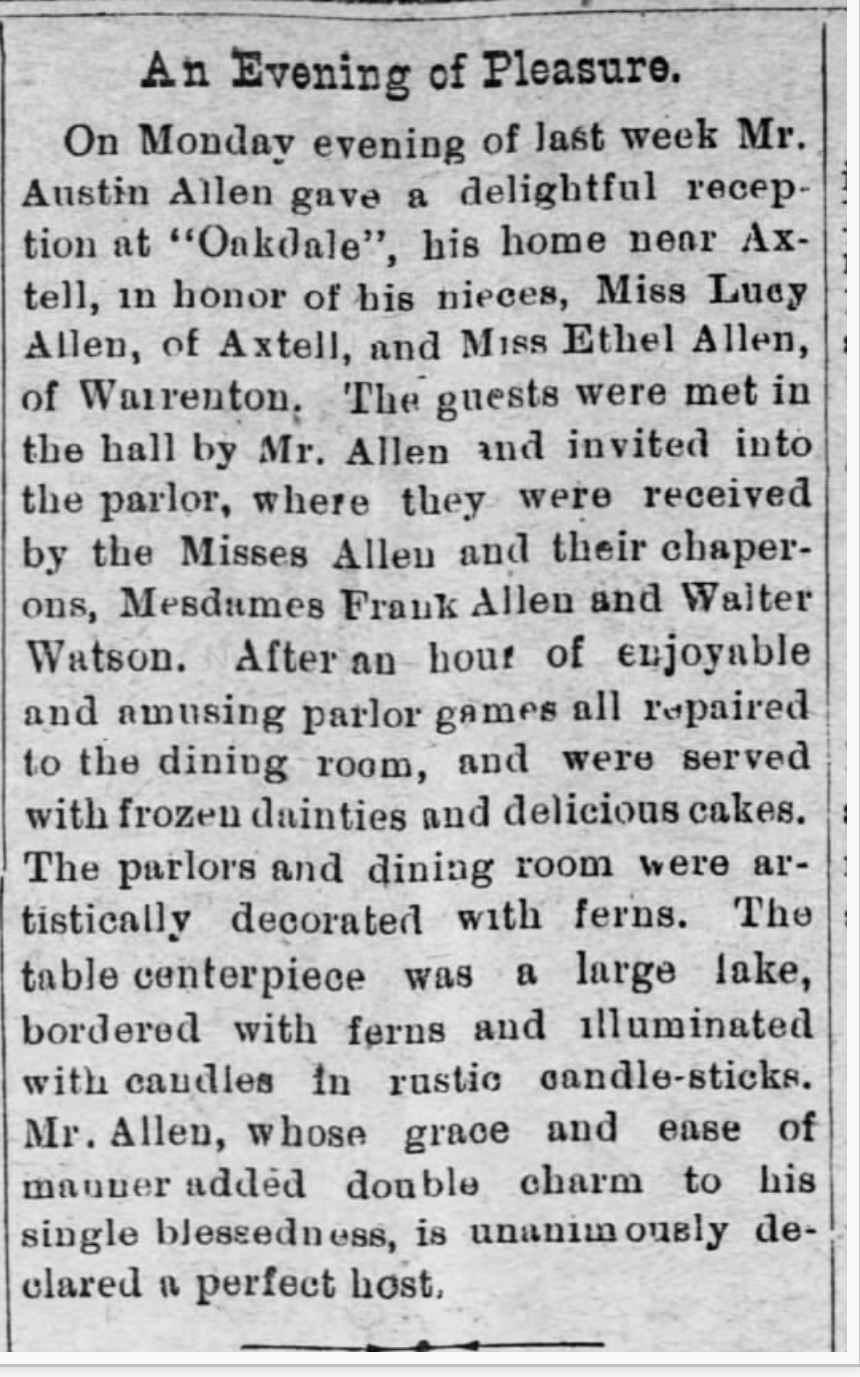 If this house is Oakdale, this would have been the hall where Austin greeted his nieces. 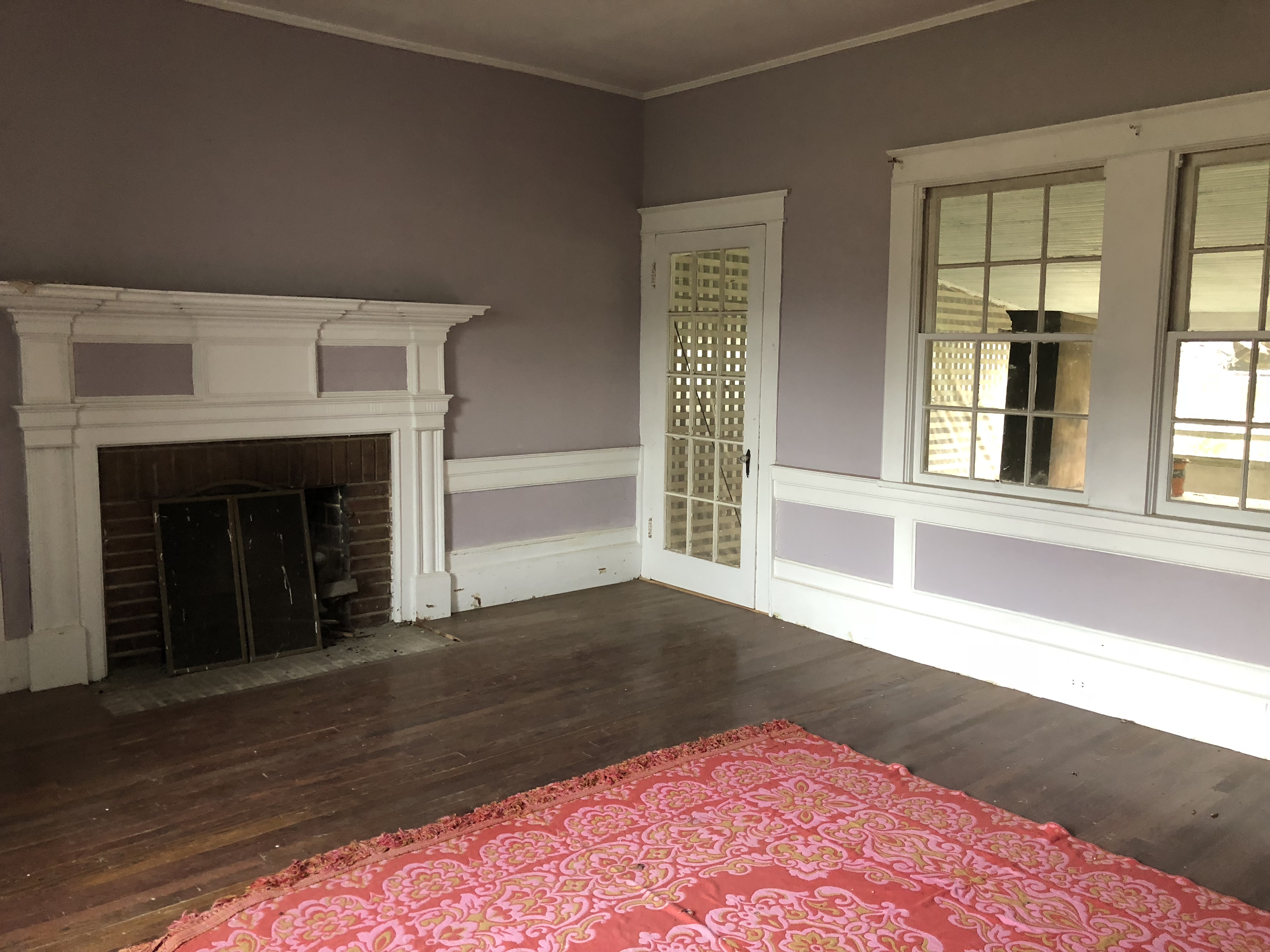 Austin is buried in the family cemetery. Yet the mother of his children is not. We thought she was most likely buried somewhere with an unmarked grave, or just a stone as a marker. We have spent countless hours researching Austin and Adline. I noticed on one genealogy board that her name was spelled differently. I started searching with the “Adline” spelling, and sure enough, found her. Buried at a black cemetery and church nearby. So it was time for another field trip for Bill Harris and me. We spent an hour or so searching for her, finally discovered her. At the time of her death in 1908, she would have been one of the first ones buried there. It was striking to me that she was off by herself. Her children are buried away from her. Did Austin make sure she had a marker back when she died? Was he in attendance at her funeral? I have so many questions. Finding her burial spot was actually emotional for me. Through all of our hours and days of research I keep trying to imagine her life. What a rough life it must have been!

Part two coming soon. We will be talking about the cabin on the Watson Farm. 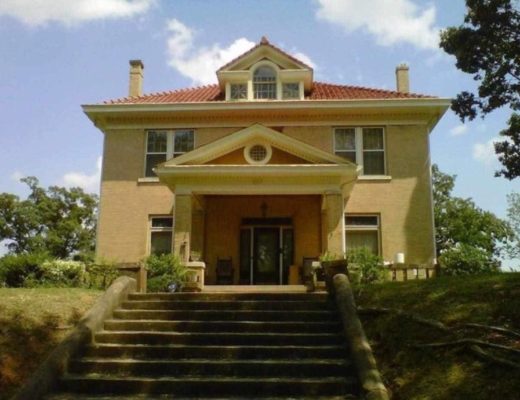