Why did I choose the Chaney House? I think a better question is why did the Sunshine Cottage choose me? I have been venturing to Danville, Virginia for the past four years, ever since I met my friend, Carla Minosh. She is owner of the Sublett-Miller Mansion in Danville’s, Old West End Historic District. I have watched the Historic District transform over the past few years. My past two visits had me thinking, maybe I should buy a fixer upper in Danville? Sunshine Cottage from Google streetview before the town bought the house and did exterior work!

So I started taking secret trips to Danville to house search. Over the past few months I know I must have driven the director of the Old West End, Paul Liepe, nuts! I kept asking to see in the same houses, over and over again. One day I would say, okay, the cottage. Then someone would talk me out of it. On New Year’s Eve I had several people with me, one a specialist in his field. They all steered me away from the cottage. I had a long talk with Carla Minosh and I walked away from that conversation 100% sure about what I was going to do. So a few days later I contacted Paul Liepe without anyone knowing. “Make the offer on my behalf. Let’s not tell anyone. Let’s just do it.”

The town accepted my offer on the Chaney House within two days, we have dubbed the house The Sunshine Cottage! So let me share why the house was calling me and then get to the amazing thing that was found in the house today.

I was immediately drawn to the exterior. Looks small enough to not be too daunting. (yeah right, look inside!) But there was something about it! Every single time I was brought to a different house that needed MUCH less work, something in me kept saying…..go back to the Sunshine Cottage. So I listened to my gut instinct and to a very trusted friend, Carla Minosh.

Then I contacted my cousin, Alice Wolfe Workman. She is a pro at genealogy. I kept hitting dead ends with my research. For awhile we both were! Then we found one little clue that kind of started unraveling things. The more we both read, the more we became attached to one of the occupants of the home. The build date on the house is 1890. We think the build date is earlier, and maybe the 1890 date is when it underwent a huge renovation. It is known as the Fred Chaney House, even though they were renters. Fred and his wife, Steffie, were very well liked in the community. He was a long time bookkeeper for one of the cotton mills in Danville. From reading their wedding announcement, they were both very well admired. 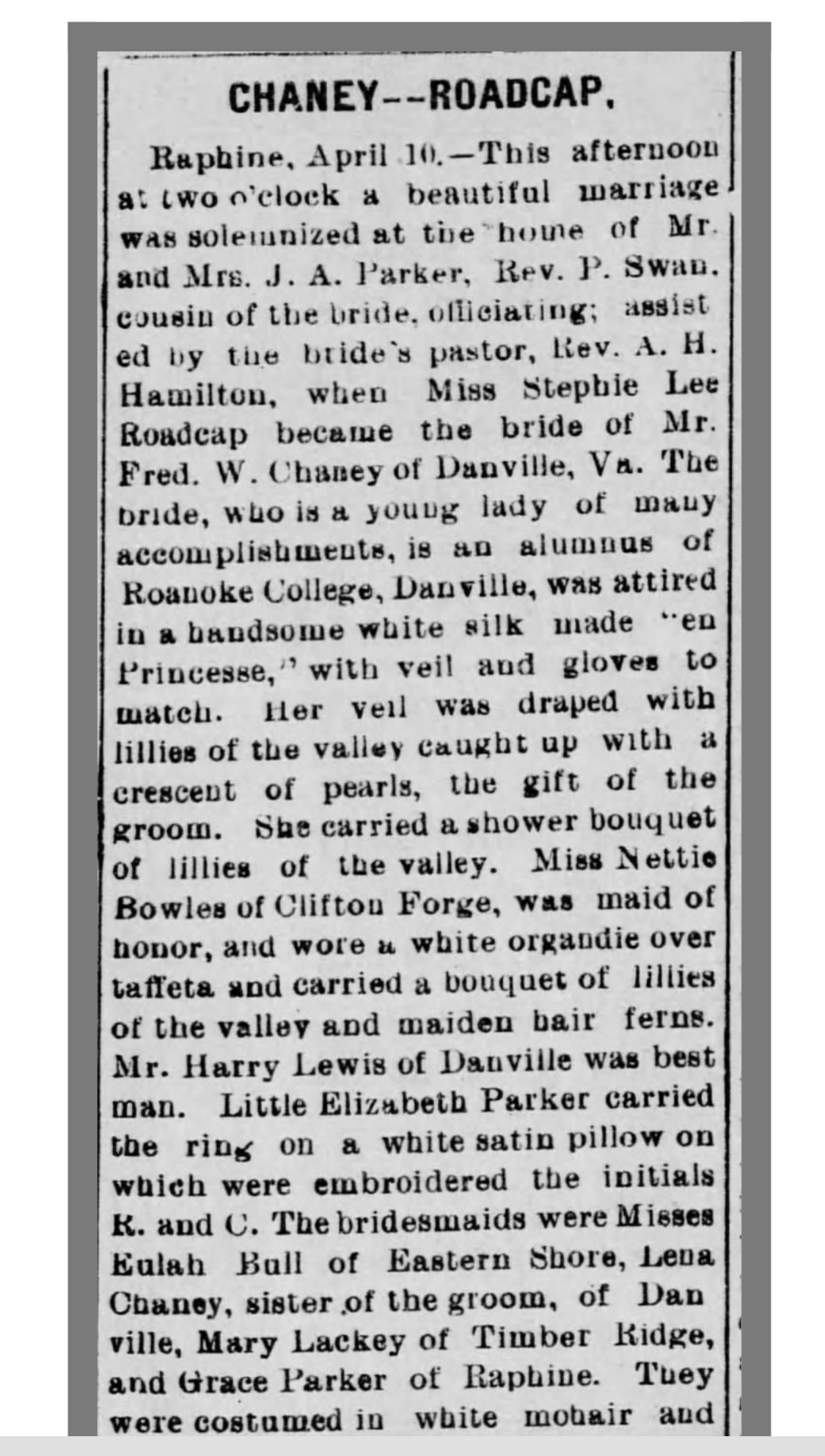 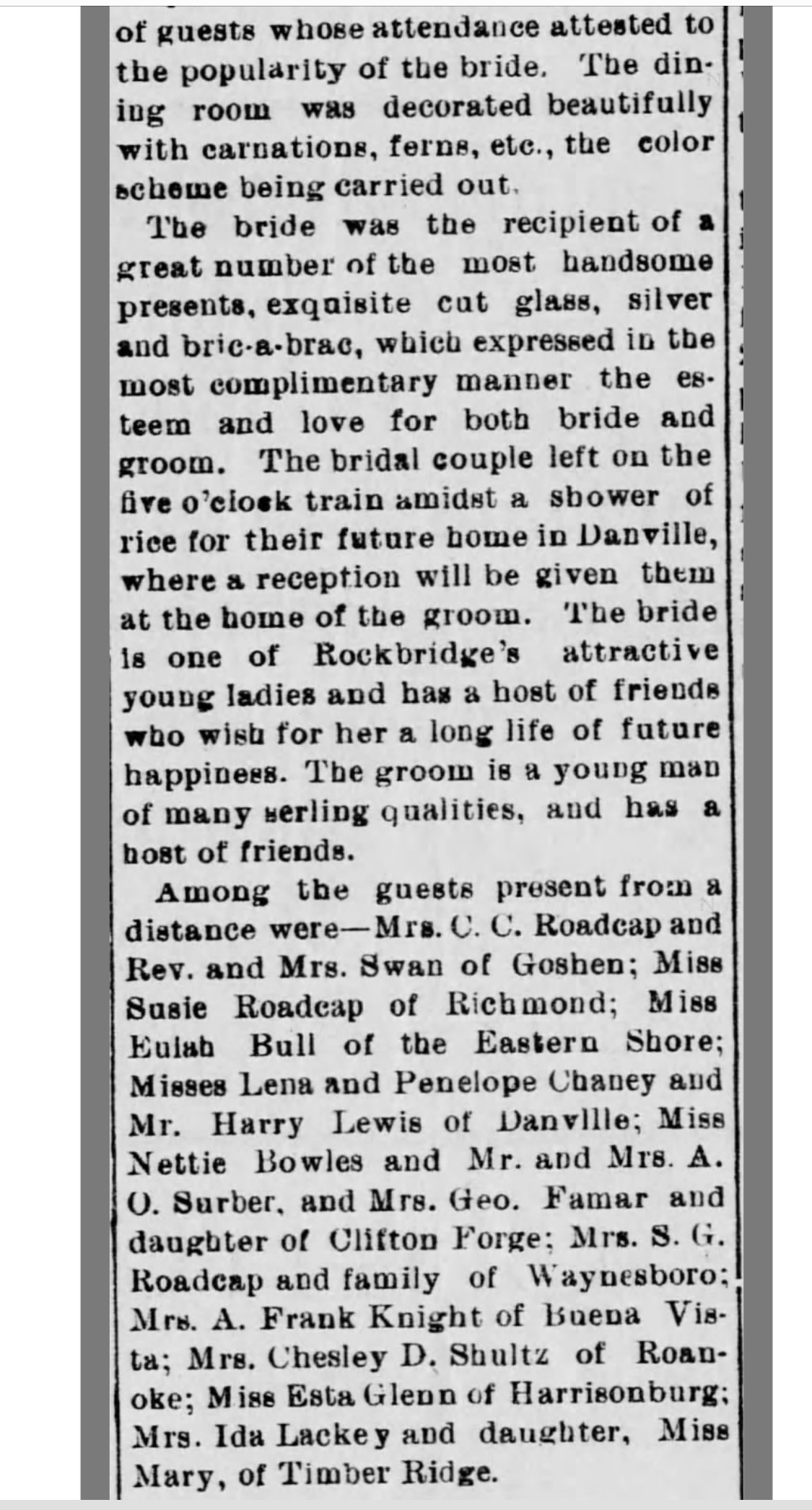 They married in 1906. The wedding announcement states they were going to live in their Danville house. They didn’t have a child until 1919. That is curious in itself for that time period. Did they have fertility issues? Did they adopt her? What was going on that they waited thirteen years to have a child? Their daughter was named Freda. There was one newspaper clipping from a Danville paper stating that Freda had guests at the Chaney home. She was sixteen at the time, I can only assume it was her sweet 16 party. Otherwise why would the paper announce that she had guests.

In 1932 Fred Chaney died. He was only 51 years old. That left his wife, Steffie, and their daughter in the home. At some point, Steffie’s mom moved into the house. I am thinking that is when they transformed a down stairs room into a bedroom with the built-in closet blocking the door from the dining room. Now remember, all this time, they were renters of this home. Was that common in mill communities like this?

In 1946 the house was sold! Steffie was told to vacate the house. At this point, Fred had been deceased for 14 years. Steffie was served an eviction notice. She went to court and fought it. She was 65 at the time. She lost that court battle. She didn’t stop fighting though. She appealed the court’s decision. She lost that also and had to leave the home in 1946. That’s when I just became entrenched in Steffie’s life. That was her house. So many memories she had there. She never remarried after Fred’s death and she lived until she was 90 years old! She lost the love of her life and her house. The tragedy doesn’t end there though. In 1951, five years after they were evicted, her daughter Freda died at the age of 32.

So that’s why I took this house on. I want to restore it to the best of my ability to the way it would have looked when it was Steffie’s house. Put it out into the universe, we are giving you your house back. I will never sell it. It will always stay in the possession of Old House Life-Michelle Bowers. So that brings me to what Cody found today while working at the Sunshine Cottage. We started stripping the dining room this weekend. It was covered with a god awful paneling! Let’s focus on one room. Cody went back to today to finish as much as he could. He had stripped the walls of the crumbling plaster around the fireplace. I had a lot of stuff going on today in Raleigh, so I couldn’t be there with him. At one point he started video calling me, which he has never done. I was imagining that he fell through a floor or something fell on him, etc. When I answered it he was visibly shaking, but smiling so broadly! He said, “You won’t believe what just randomly fell from behind the mantel! I was stripping one last strip of plaster and when I did it, this fell!”

It is a 1910 edition of ‘The American Woman’ magazine. Why was it behind the mantel? In 1910 Steffie was the only woman living in the home. So it was clearly her magazine. I got choked up and kept thinking, omg, I am supposed to be in that house. Steffie is letting me know that I am supposed to be there. The first two days after them accepting my offer I was seriously doubting myself. At one point this weekend I looked at Cody and said, “What have I gotten myself into?! I wish the house would just talk to me!! Let a ghost appear and tell me I made the right decision!”

So this dropped out of the mantel! You are getting your house back, Steffie. 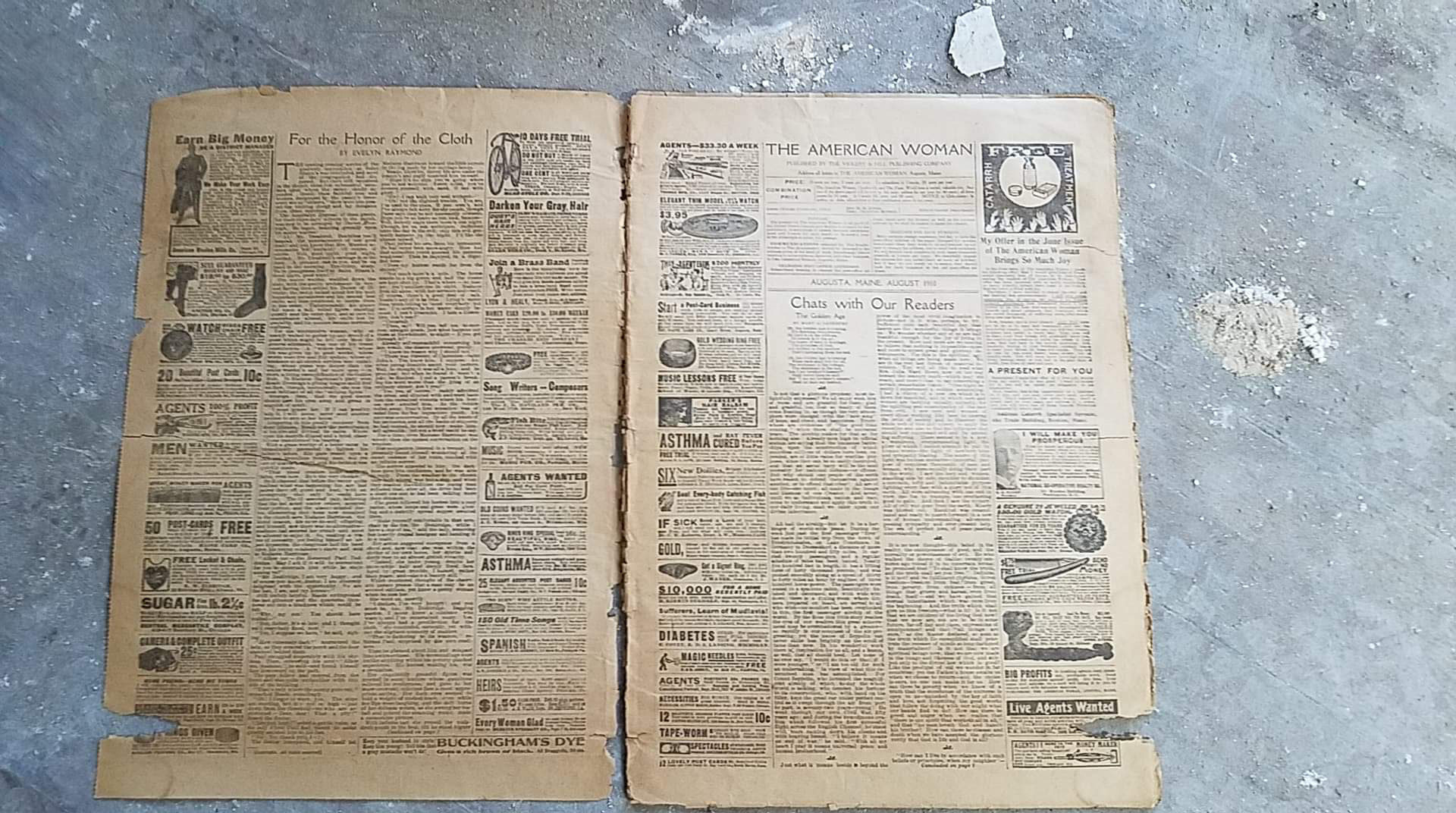 I am not naïve, I know I have a lot of headaches coming up. A lot of money going out. But in the end, I will have preserved something, learned a lot, and done my part in helping rebuild the Old West End in Danville. I will put a sign up somewhere, remembering Fred and Freda, but most importantly for me, remembering Steffie, who loved her little Sunshine Cottage.

Interior tour of cottage is posted at top of post.