Today took me way out of my comfort zone. I have never participated in an auction….of any sort. Today was a tax foreclosure. Let me say it straight up, I did not get the property, but I feel like I was supposed to be there so I could meet a certain elderly man. So read on…..will be long.

I first want to thank an anonymous lady. She first told me about this property about a month ago. I cannot thank her enough. She answered all of my inane and plentiful questions about the entire process. She knows who she is. Thank you! 😊

Driving to the auction I felt oddly emotional. I am sure part of it was just not knowing what I was doing. I got there early and contemplated staying in my car the whole time. BUT……it is International Women’s Day. Need to show my daughters that we have to confront our fears and sometimes that means doing new or challenging things. Even though I had one sick one at home!

12 people were there. Bidding started at $4,300. I bid three times. I stopped at $11,000. It was obvious to me one person was determined, an elderly man. I already knew who he was. (I am a research fanatic) Let me share the property history before I say how this all ends.

I have included pictures of the house from back in early 2000. The Vincent Allen house was built in 1790. Vincent married Mary Bowdoin. (Multiple spellings of her last name) Mary’s grandfather was a direct descendant of Thomas Jefferson. Vincent and Mary are buried on the property. I believe I saw their graves today. Very overgrown.

Vincent’s father was Captain Charles Allen. He is buried very close to the property. He not only fought in the French and Indian war, but was very important in the Revolutionary War.

Here is where it gets mind blowing. From genealogy records and verbal history, George Washington was having problems getting through the N.C. forests due to the “Indians”. (Native Americans) George Washington heard of a Captain in N.C. that knew how to traverse the forests. Captain Allen was summoned to Washington. Imagine how long that took!

It is said that George Washington and Captain Allen became close friends and together helped form our nation. I am sure through family stories this has been magnified over the years. I did research pensions, and a lot does pan out.

Mr. Amato was the final bid today. I knew who he was going into it. He and his wife owned it before the last owner……the one that let it go to hell. Mr. Amato’s wife is an Allen descendant. I hung around after the auction hoping to speak with him.

He uses two canes. He has his gray hair pulled back in a thin ponytail. He walked out of the courthouse and I approached him asking if we could talk. We talked for 30 minutes at the courthouse. I told him my sincere plans for the house.

As we talked his eyes welled up with tears once and I realized how personal this was for him. I changed the subject and asked about the graves. Where are they on the property??? I looked and didn’t find them.

He suggested we drive out to the house. I would love that, I replied.

I then told him I want to help him protect that property. I want nothing in return. I might do a video here and there. I felt a connection with him. It needs to stay in the Allen family.

I did mention how it needs so much work and I am concerned about the workload for him. I told him I am positive I could get a lot of volunteers to help out. So stay tuned.

I am a firm believer that we meet people for certain reasons. I feel today proved that. 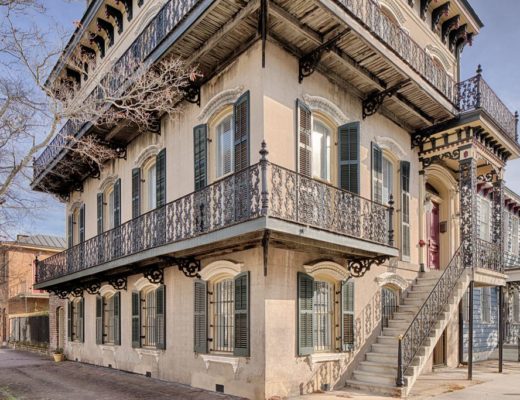 This unique 1860 Savannah, GA home is amazing (and for sale!)